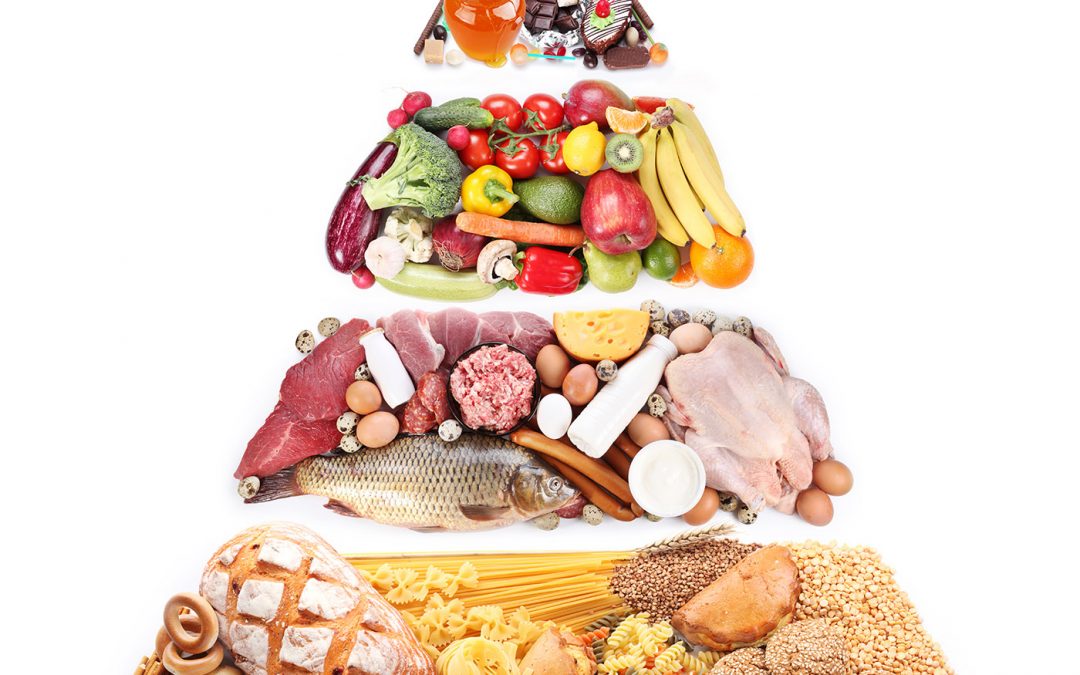 If you look at the old “Food Guide Pyramid.” this is what people know about diet!

This is so interesting to me, because if I were a conspiracy theorist, I would say that if I wanted to get an entire population dependent on pharmaceutical drugs and I had to work out the program of how to achieve that, Step 1 would be to create this diet. Because this diet guarantees that people will fall apart. It guarantees overweight; guarantees blood sugar problems, diabetes, cardiovascular disease and more. That’s what this diet is all about.

You are probably familiar with the true data on this, but to many of your patients this is the only data they have! They’ve been educated on it from the time they were little kids watching TV on Saturday and Sunday mornings, when their parents let them sit in front of their TV sets for two or three hours in order to not annoy them. They got commercial after commercial telling them how sugar-coated cereals were perfect for their health! This is where their education lies.

It’s worse now than it was before. What I love about now is that they are no longer so covert about what they’re trying to do: in between these food commercials they put pharmaceutical drug commercials. And I love the pharmaceutical drug commercials. You can either shriek in terror or just laugh your head off about the insanity of it when they tell you that the “Purple” is what you need. But don’t use this if you breathe, eat, drink or go to the bathroom, because it could kill you, and death is an occasional side effect, and ask your doctor if it’s right for you!

The insanity of it is just so amazing. This is the stuff that people are being educated and inundated with, and this is the major thing that we’re up against, and it’s called false data. Somehow, we have to undercut this false data, but you can’t do it in a three-hour lecture. There is a way of bringing this about, but you have to understand that this is what people do and think.

At the base of the triangle is “bread, pasta, cereal,” 6 to 11 servings a day. If I had 6 to 11 servings a month, I would be crippled! Now, that’s my body; I’ve brought it back from the dead and I have to keep bringing it back. These things tend to have a momentum and an inertia of their own, and once you pass 35 the inertia is no longer upward. I know for some who aren’t at 35 yet, you think “Oh, God, he’s crazy. I’m just going to live forever!” Well, I thought so, too, until I was almost dead in 1991, and said to myself, “Well, I guess I’m going to find out what’s next!” And, quite frankly, I wasn’t ready to find out what was next, and so we had to figure out how to turn my health around.

But this eating 6 to 11 servings of “bread, pasta, cereal,” is one of the most important pieces of false information you’ll ever find! And we have to figure out (and I had to figure out in my practice) how to overcome this in order to get sick people well.

They updated it a little bit, by creating a completely non-understandable pyramid. But, again, the big category is still “grains,” and they have vegetables and fruits and milk and meat and beans. I mean, it’s just the reverse. Well, this was their attempt to improve. This was somewhere around 2002, 2004. The earlier pyramid was finalized, was “perfected” in around 1992, but they’ve been preaching this for decades. They finally issued it as, “Well, we’ve piloted it on enough people; we’ve caused enough destruction to ensure the future of the pharmaceutical industry; let’s publish it and make it official.” That’s kind of the policy.

I say things like this and people go, “Freddie, how can you say things like that?” Well, I learned years ago that the way you determine somebody’s purpose is not by what they say, it’s by what they produce—what they do, what they make. If you want to know what somebody’s real intention is, don’t listen to them; look. What’s the end result? Is it actually improved health, or is it a worsening condition?