Our Healing Tradition as Chiropractors 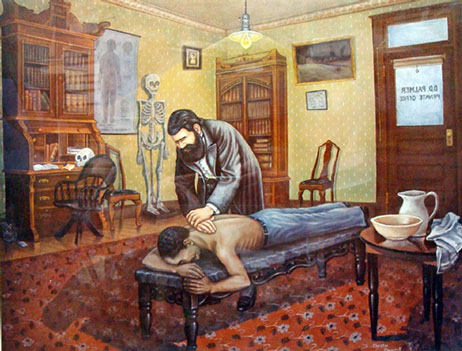 When I was a kid, my father was miraculously cured—by a chiropractor—from an athletic injury pronounced “incurable” by the best orthopedic doctors, neurologists and other esteemed medical professionals (who wanted to put him under the knife anyway, because he had “nothing to lose”).

After his recovery, Dad became a “chiropractic zealot.” Any visitor who showed up with an ailment would find himself whisked away to a chiropractic office—whether it was a friend with lupus, a young cousin with rheumatoid arthritis, a woman with debilitating migraines, the son of my dad’s best friend who had asthma, an uncle with incurable ulcers, or a baby with Crohn’s disease. Dramatic recovery after a few adjustments was the order of the day.

When I graduated from chiropractic college and went into practice in 1965, I fully expected to become known as one of those healers. Instead, I found myself characterized by society as “the pain guy.” How did that happen?

I’d had some great successes along the way. But as time went on, the regularity of these healing miracles became less and less, and my practice became more and more just a “pain clinic.” I saw the same trend playing out in the profession as a whole, with insurance companies dictating what was considered a legitimate treatment for which we could be paid.

The original vision of chiropractic

Chiropractic fell out of touch with the vision D.D. Palmer had set out for us:

“I hold it to be self-evident that all men and women who have acquired sufficient knowledge and skill to remove the nerve tension which prevents physical, mental and spiritual development, are engaged in a work of a higher order than that ordinarily required of, and performed by, the physician.” [The Chiropractic Adjuster, p.14]

His understanding was very specific:

“Now that we have learned the cause of disease—displacements of some part of the skeletal frame superinduced by accidents and poisons, we should make much more rapid strides toward health and longevity.” [p. 737; emphasis added]

A toxic lifestyle takes its toll

Writing in 1910, Palmer could hardly have envisioned the degree to which poisons in our food, water and air supplies would come to dominate the health (or disease) picture. It was this factor that very nearly killed me in 1991, and drew me back into the healing profession after more than a decade spent crusading for other causes.

Years of traveling all over the world, living in hotels, eating in restaurants, and always being on a weird body schedule finally caught up with me. My body literally collapsed. I was diagnosed with chronic fatigue syndrome—incurable, of course. My heart was failing, my adrenals didn’t work, my thyroid didn’t work, my whole endocrine system shut down. I was aging incredibly rapidly. My pains became more chronic and resistant to the many excellent adjustments I received from really good chiropractors.

I was suffering from secondary subluxations, which were constantly being created by internal weaknesses, toxicities, and imbalances, faster than spinal adjustments alone could correct them. As it turned out, all of it was traceable to nutritional deficiencies produced by unwittingly eating a steady diet of adulterated food.

My wife Dana and I went many thousands of dollars into debt trying every therapeutic modality that seemed to hold out even the faintest promise of relief. The technology to resolve my case literally didn’t exist yet.

More than anything, I didn’t want to die and leave Dana stuck with all that debt. So, I set about to complete my education in nutrition and the diagnostic methods that were available in 1991, including Applied Kinesiology in its many variations. We found so many deficiencies that it seemed I would choke to death on vitamins if I didn’t bring my pill count under control. This drove me to develop our current methods of determining exactly how much of each nutrient the body requires and in what priority.

I devised a sensible program which opened the door to a most amazing thing: my adjustments started holding again, and with the reduced and corrected subluxations, my health started to return. I took on a few patients, working out of a good friend’s chiropractic clinic in a small town where I didn’t know anybody.

Growing a practice by referral

Dana canvassed the downtown area with a clipboard and a few survey questions. She asked people if they had any chronic health problems and, if so, were they interested in a non-conventional approach? As a thank you, she offered each person a complimentary health check.

We were going to use the survey answers to create a flier, but I had my hands full with the business generated from those free health checks. Of the first thirty women I examined in 1993, twenty-five are still in the practice, and their referrals generated more referrals—literally by the thousands. We never did send out that flier.

That small town of 15,000 had at least 35 chiropractors within a short drive of my office, yet I didn’t regard them as competitors. I encouraged patients to stay with their existing chiropractor if they had one. I had to concentrate on nutrition visits just to keep up with the workload.

Before long, I had people flying in from Southern California, Korea, Germany, South America and South Florida in the middle of the winter to spend a week or two or three in incredibly cold, miserable, bleak weather because they weren’t confident anyone else could help them.

I had done the impossible. I had enabled my own body to experience the miracles of chiropractic as D.D. Palmer laid it out, and my results were consistently duplicatable with others. I had a earned the reputation of a healer in the grand chiropractic tradition.

I realized I couldn’t keep this subject to myself..

A nationwide network of healers

My next challenge was to make it possible for all of my chiropractic colleagues to become known as healers again. After years of developing our training methodologies at Ulan Nutritional Systems, I am proud to announce that we can achieve this goal uniformly with every chiropractor we train.

From a lone practitioner in upstate New York, we have grown to over 500 clinical masters throughout the U.S., whose reputation as healers is well established and growing.

Practicing all aspects of chiropractic as D.D. Palmer envisioned and specifically wrote about in his landmark book, The Chiropractor’s Adjuster, in 1910, we can each take our place as true healers in a society that needs healing more than ever before.

Yes, we can relieve pain. But now, by incorporating Nutrition Response TestingSM—which is truly Advanced Chiropractic Nutrition—into our practices, each of us can be known as the healers we always aspired to be.