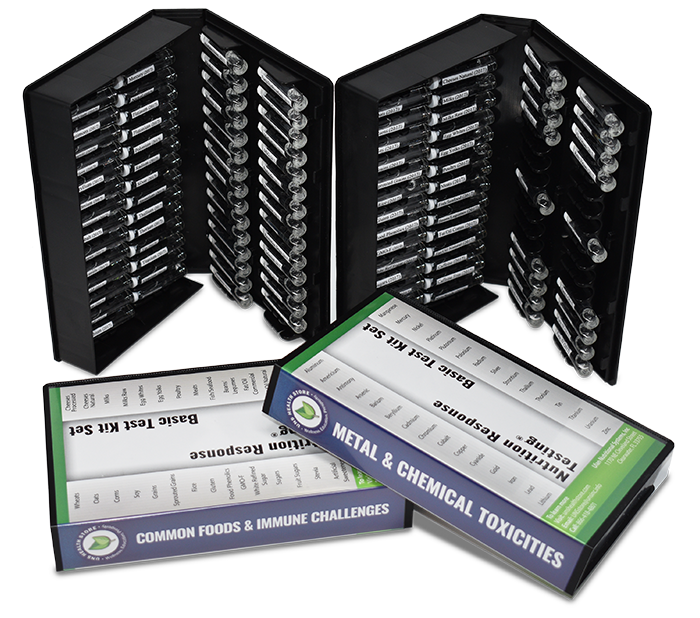 The New Basic Stressor Test Kits were released in November 2016, as the culmination of an extensive research project.  Now known simply as the Test Kits, the updated, complete set supplants the original Test Kits developed in 2002.  It is important to note that the original basic Test Kits still work for what they were designed to detect. They have been used to get sick people well for over two decades.  And nothing has changed in terms of the handling.  What has changed is the number of toxins in the environment that can have a detrimental effect on patient health.  The new Test Kits have been reformulated to detect these new stressors.

By 2015, Dr. Freddie Ulan had begun to realize that an increasing number of patients were not responding to NRT.  It seemed apparent that there were underlying causes that were not being detected in testing.  This was shocking after nearly two decades of incredible success using the original Test Kits, so he set out to discover what had changed.  An extensive research project was launched in order to keep Nutrition Response Testing® and its testing procedures on the cutting edge.

It turned out that there had been some recent discoveries and changes in the medical model.  The number of food stressors was found to have increased and there we

re several new pathogens and new problems listed by the CDC.   We felt the need to upgrade the Test Kits not only to keep up with the medical model but actually to stay one step ahead.

The Test Kits were expanded to include these new stressors.  The vials were redesigned and new vials added to include the full array of stressors found in an increasingly toxic world.  All to give you certainty: if a stressor is present in your patient you are guaranteed to find it.

From a patient management standpoint, you can be very specific as to what the patient will have to avoid and or what the patient in a very positive way will not have to avoid. The goal is to take out only what you have to take out.  You can have absolute confidence and certainty that no matter what tests or doesn’t test, you know you are absolutely on the right path.  In a very good way, nothing changed as far as the handling, but we expanded the detection so that you have an expanded universe in terms of detection.

With the new complete Test Kits, you can tailor make the exact dietary recommendations based on which vials test well and which ones don’t test.  So, you can tailor make the exact dietary recommendations and differentiate what the patient can and cannot do.  You will know exactly what you need to alter and/or change in the patient’s diet to handle all of those food items that the patient may or may not be getting themselves in trouble with.  Food vials now take up every slot except for one.

There are four categories of major Immune Challenges.  You can be sure that every bacterial situation will be represented in one of your four vials.  The Immune Challenges are separated into the four major categories for the ease and convenience of knowing and isolating what might be the situation.

There are two additional vials, which are called virulence factor vials.  Many times, what you are dealing with is the aftermath of what happened the last time they were sick or had an illness. These virulence factors by definition are molecules produced by pathogens that contribute to the pathogenicity of the organism and enable them to achieve colonization in the host.  In other words, a previous illness can set the stage for new pathogens, to provide a host environment for new strains of pathogens.

The third side of the Test Kit is metal toxicity.  There are major changes here. Some of the things in your metal side of the Test Kit, you are not going to be able to find out, or figure out where they came from; they are in your air, in your water, they are everywhere.   You are still going to apply good patient management and ask the patient if toxicity is detected.  The patient may be in complete mystery as to where they are being exposed to it.  A lot of these things are being used in your foods.  They are being used in your makeup. Most recently they found over a thousand different heavy metals and poisons in tap water.

Patients were not only having a problem with heavy metals; they were having a problem with metals in general. We added some new metals to this side of the Test Kit to encompass anything that your patient might be running into.  Some of the more wicked ones and the ones that we’re shocked that we’re finding a lot of include plutonium, polonium, and uranium.  Interestingly enough, patients are testing for these. They are being exposed to high levels of radiation. You may or may not be able to find the source of this.  If you have a patient who’s demonstrating flu-like symptoms and it’s not the flu, realize that radiation looks very similar to the flu in the body.

You will be surprised how many times the patient will come in and say, “oh, I have the flu.” and what you find is one of these newer vials on the metal side of your Test Kit.  These metals are the top cancer-causing molecules. Again, we are not trying to diagnose cancer or stage four illnesses of any kind, but it is important to detect the presence of these metals.  You are happy when you find them, because now you know, you can do something about it.  Metals now encompass every single vial slot on this side of the Test Kit.

The most changes, improvements, and modifications that have occurred are on the chemical side of the Test Kit.  There are so many poisons now that have been classified as toxic but are still being used.  From a patient management viewpoint, if they do work in chemical industries, you won’t be surprised to find some of these more dangerous vials.  But a lot of these chemicals are in your everyday items, in your food, your makeup, and other things that you are using daily.  Regardless of how bad or how scary the vial label looks; the bottom line is you need to know about it so you can get your patient well.

The importance to you as a practitioner is that, if it’s acting as a hindering factor to this patient getting well, you need to know about it.  With the new Test Kits, you have that capability.  The remedies have not changed.  But what the patient has been exposed to, you now have ample opportunities to find and handle.  The whole purpose is to put you even more on the cutting edge in Nutrition Response Testing than you already are.

One last thing of note is that all of the vials now have the year next to them.  From this point forward, anytime there’s a change in the number of prevalent toxins listed by the CDC, the NIH, or the FDA, and we find out about it, we are going to add it to the correct vial.  [Already, in 2020, the Virus 1 Vial has been updated and that update is now included in the Test Kit.]  All vials are marked with their issuance year so you know that you have the most up-to-date vials.

The old Test Kits still work.  They’re still valid. They’ve gotten sick people well for you.  The new Test Kits give you more, find the root cause in more cases.  A complete redesign was necessary to make the new Test Kits comprehensive, to keep up with everything that is going on in the industry, and to keep every vial in its most perfect form for years to come.

Shortly after the New Basic Test Kits were released in November 2016, we produced an instructional video with Dr. Lori Puskar to take you through the updated kits so you could see what had changed.  This article is taken from the transcript.

The Virus 1 vial was updated in 2020 and included in all Basic Stressor Test Kits as of March 2020.  The standalone Virus 1 (2020) vial is available as an upgrade to the UNS Basic Test Kit If you purchased yours prior to March 2020.  Available here.